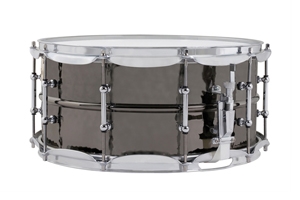 In 1909, the brothers Ludwig, William and Theobaldner, were the founders of what is now the Ludwig-Musser Company, which is owned by Steinway Musical Instruments. Ludwig Musser is a leading producer of drums and other percussion instruments.
Ludwig’s initial product was an improved pedal for bass drums that could beat faster than competing products. The brothers developed the pedal in a south-side Chicago barn they rented. Following up on their initial success, they next engineered:

Ludwig Drums and The Depression

The Depression forced Ludwig to merge with the C.G. Conn Company in the 1930’s. The merger alienated William Ludwig, who could no longer be involved in the development of new instruments, so he left the company in 1936 and subsequently opened the W.F.L. Drum Company. The first product of the new company was the Speed King Pedal, still in production. The company was bought back by Conn in

1955 and renamed the Ludwig Drum Company. Ludwig became Ludwig Musser in 1966 when it acquired the Musser Marimba Company.
William Ludwig died in 1973, and later the company was acquired by the Selmer Company, now part of Steinway. Ludwig products are produced today in North Carolina, Illinois, and Asia.

Ludwig is well-known in the drum industry for its innovative products, materials and finishes. For instance, in the 1920’s, the Black Beauty Snare Drum

caught the imagination of consumers due to its hand-engraved black nickel-plated shell. It has been reissued a couple of times since its introduction.

Also dating from the 1920’s were the Ludwigold series of gold-finished drums, which have become collectors’ items. Not to mention this Ludwig 100th Anniversary 1928 Gold Triumphal Brass Snare Drum w/ 24K Gold Plating (Only 50 Ever Made)

which is only $11,000! To this day, the company can boast of the industry-standard snare drum, the Ludwig Supraphonic, made of chrome-plated aluminum (originally it was made from plated brass). Many notable drummers use this model.

Today, most Ludwig drums are made of maple wood or plywood. A distinctive plastic pearl wrap surrounds the shell of Ludwig wood drums. Ringo Starr made the Oyster Black Pearl famous in the 1960’s. Other Oyster Pearl colors were introduced over the decades, including: 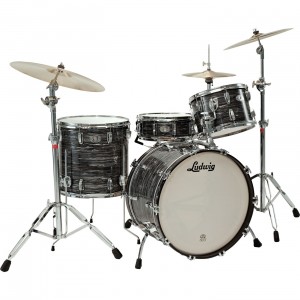 Ludwig’s current “Legacy” line of drums reintroduced the classic maple/poplar design with maple reinforcing rings. The company was also known for its use of stainless steel in its drum kits, but these models proved to be prohibitively expensive. The current L-arm/double braced heavy-duty hardware system is now considered an industry standard. Special custom products and limited editions are immensely popular among drummers and collectors.

For a more detailed history of the Ludwig Drum Company I would highly suggest reading The Making of a Drum Company : The Autobiography of William E. Ludwig II

. I am about 3/4 of the way through with this book and have loved every page of it. Plus, you’ll learn alot about the artist relations and business side of owning a custom drum company!