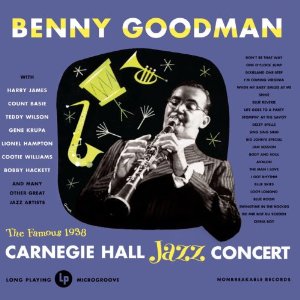 For some inexplicable reason, columns devoted to musicians and their lifestyle always seem to lead in the same direction – directly toward a gutter. Perhaps editors are convinced that the public yearns to know of carnal exploits rather than creative triumphs, that Iggy Pop’s latest bloodletting, for example would be better suited for public exposee than his latest single. The editors are undoubtedly right, but let me assure you, dear reader, that my type is capable of serious discourse, too. And there are a bevy of “legit” musical topics on which to expound.

That much said, I have decided to devote the next several hundred words (that’s pretty substantial, isn’t it?) to one of the greatest musical triumphs in history. To properly dig, you must transport yourself back to another era: the year 1938 and a place called New York City.  On the evening of January 16, a young bandleader called Benny Goodman assembled one of the greatest musical lineups of all time for a little hoedown at a class joint known as Carnegie Hall. We are most fortunate that the resultant events were recorded, for the fellas that night created a stunning musical document, a testament to the glory of swing and jazz: “Live at Carnegie Hall.”

For those of you who are bewildered that my choice for 20th century musical moment did not include the British Invasion or Mr. Presley’s verbotten gyrations, please allow me to explain. The mid-’30’s found America unwell – stuck in the doldrums of a lingering depression, and on the verge of a second world war. The great swing orchestras that rocked the world from 1935-46 – Chick Webb, Duke Ellington, Count Basie, the Dorsey Brothers et. al. – these mighty juggernauts gave the average joe a bit of respite.Their energetic, infectiously danceable arrangments provided weary Americans a thrilling form of escape. In fact, the fervor surrounding swing proved great enough to generate for the first time the sort of hysteria that we now associate with rock’n’roll. It was also one of the few times in history where virtuosity and popularity actually intersected. Under these circumstances did Mr. Goodman organize his little party at Carnegie.

The concert was important for a number of reasons. First, it was an arrival of sorts for the swingin’ cats, a recognition that their music had achieved the sort of credibility demanded for admittance into Carnegie’s hallowed halls. Let us not forget that Goodman, with his multi-racial ensemble (the first of its kind), wildly exhibitionisitic stage act and fanatical youth following, had begun as quite a controversial figure within mainstream American culture (think Alice Cooper or Marilyn Manson, literally).

Which brings us to the lineup. By ‘38, Goodman had succeeded in making a star not only of himself, but of the key men in his band – Gene Krupa on drums, Teddy Wilson on piano, Lionel Hampton on vibes, and Harry James on lead trumpet. Each would go on to legendhood as a solo artist, but here they were, all under one roof –  young, in top form and ready to take the world by storm. The concert also featured a host of stars from Ellington’s ensemble. They participated in a jam subtitled “Twenty Years of Jazz”, a medley of tunes that celebrated the genre’s first legion of heroes – Bix Beiderbecke, Louis Armstrong, the great Duke himself. As if that weren’t enough, John Hammond, the critic-entrepenour who brought us a range of artists from Billie Holiday to Bruce Springsteen, managed to work one of his up and coming discoveries onto the bill – a certain band leader from Kansas City called William Basie. It is the Count’s slammin’ horn section that provides the punch for the incredible second half of the concert. The material chosen that night lingers indelibly, and included “One O’Clock Jump” (Basie’s theme), “Stompin’ at theSavoy” (Chick Webb’s theme and the biggest hit from the concert), and of course, Louis Prima’s “Sing,Sing,Sing”, which by this point in Goodman’s career had morphed into a 12 minute showstopper (take THAT, Peter Frampton).

Amazingly, the entire proceedings were captured by just ONE suspended microphone, the action then relayed via telephone cable two blocks to the CBS studios, where it was “carved” onto master acetates. Primitive indeed, but the incredible accoustics of the hall give this recording a higher fidelity than most of its studio-produced contemporaries. For the first time, drums are audible, revealing every crisp Krupa fill and tomtom flurry (typically, due to frequency and volume issues, drums were kept at a considerable distance from microphones in a studio, the result often sounding more like a pillowfight than an instrument). Each dynamic interplay of soloist, ensemble and audience is delivered with delicious clarity, from Jess Stacy’s five spine tingling choruses on “Sing, Sing, Sing” to Hampton’s grunts on “I Got Rhythm.”

Unfortunately, “Live at Carnegie Hall” also marked the zenith of an era about ready to  fall victim to its own success – only one month after the landmark event, Goodman’s great orchestra split up (the first of several times) due to conflicting egos. Within three years, the mounting expense of a World War would put most of the big bands out of business, and by 1945 swing was out of style altogether. Goodman would play on into the 1970’s, but never again to reach the dizzying heights of stardom acheived on that chilly night in ‘38. As for the recordings, they were finally released twelve years later as one of the first commercially produced LP records, proving that undoubtedly, good things are worth waiting for. And boy, does this one stand the test of time!!

In my opinion, “Carnegie Hall” deserves not only the title of first “live album”, but also the honor as one the best. Do yourself a favor and check it out. Carnegie Hall Jazz Concert Featuring Gene Krupa on Drums

About The Author – Daniel Glass

Daniel is an accomplished drummer, writer, historian, and film maker. He tours regularly, and is a drum clinician. I encourage you to check him out when you can! Check out his tour schedule at www.danielglass.com!