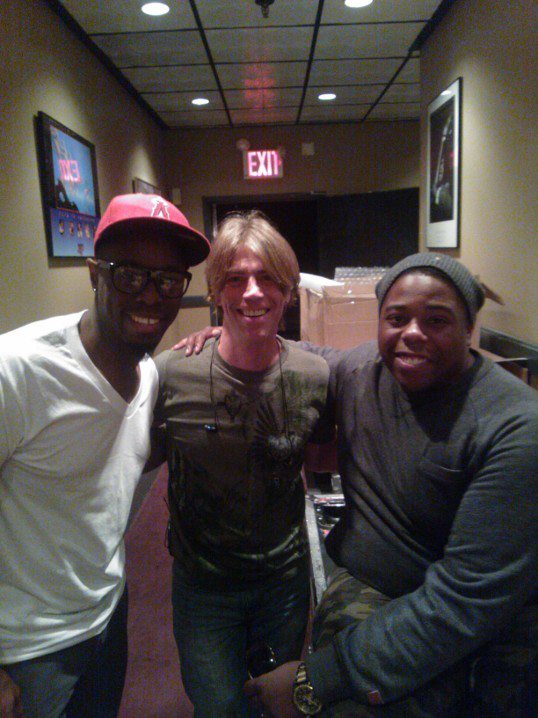 Kenny Sharretts has worked as a drum tech for Melissa Etheridge, Kelly Clarkson, Peter Frampton, Joss Stone, The American Idols Live, 30 Seconds to Mars, and Smashmouth. He is the current drum tech for Stevie Wonder and Rihanna. As a drummer, he has worked for several Texas legends including Monte Montgomery, Kevin Fowler, Joe King Carrasco, Rusty Wier, George Devore, and Custard Pie. He is also an active member of the band So Called Underground.

Kenny sent me a total of 6 tips that will be released once a week for the next 6 weeks! If you enjoy the tips please leave Kenny a comment or question by clicking here!

Holes in bass drum heads are like a colonoscopy. A necessary evil in a live setting. Most soundmen at a club level do not have the luxury of being able to isolate the kick drum sound and maximize click AND thump without a hole. Since the big dogs usually use 2 microphones for the kick (usually an SM91 inside the drum, and an SM 52/ D112/etc. in the hole), the hole becomes mandatory unless you mount the microphones inside the kick. So where to put the hole? How big should it be? As far as size goes, 5-7 inches across is all you need. Any more and the tone of the head significantly suffers. More head, more tone. Any smaller, and you can’t position the BD mic very easily. As far as where to put the hole, a lot of cats put the hole in the lower left or right-hand corners of the drum. This is a useful technique if you want a lot of overtones in your kick sound (i.e. sounds like an old school un-ported marching bass drum). My preference, however, is to have a tight, punchy kick with controlled, but voluminous bottom-end. This is achieved by cutting the hole DEAD CENTER of the bass drum head. Think about it like dropping a pebble in a pond. The circles of sound go outward from the center of the head. By cutting the hole dead center, you maintain the continuity of the circular sound waves. A hole in the side, just breaks them up, thereby creating more unnecessary overtones. I began using the “center hole” technique with Kenny Aronoff on a Melissa Etheridge tour. The FOH (front of house) mixer said the difference was night and day in terms of punch, bottom end, and control.

BTW, two products I recommend for cutting the hole, are the Aquarian portholes or the Remo Dynamo

hole templates, and “The Hole Cutter

“. The template is a must. Not only does it give you an easy, almost fool-proof guide for cutting a clean hole (please use an Exacto knife or “The Hole Cutter”), but it protects the hole from tearing, AND acts as a gentle mute for the front head. This greatly reduces the amount of muffling needed (so you get a bigger sound), and you can avoid the tone robbing felt strip many people use. “The Hole Cutter” is an outstanding tool for the hole cutting procedure. (Hence the name, duh! LOL!) Strangely enough, it doesn’t fit perfectly within the Aquarian/Remo templates, but you can make it work.

Finally, use a protective disc where your beater hits the BD head. I know some people complain about how it affects the tone, but they really do protect the head from breaking due to friction. They can also add a little attack to your kick sound. Remo Falam slams are great for rock and funk drumming but are a little heavy for some cats. Evans and Aquarian both make thinner less intrusive kick pads. Drum on brothers and sisters.