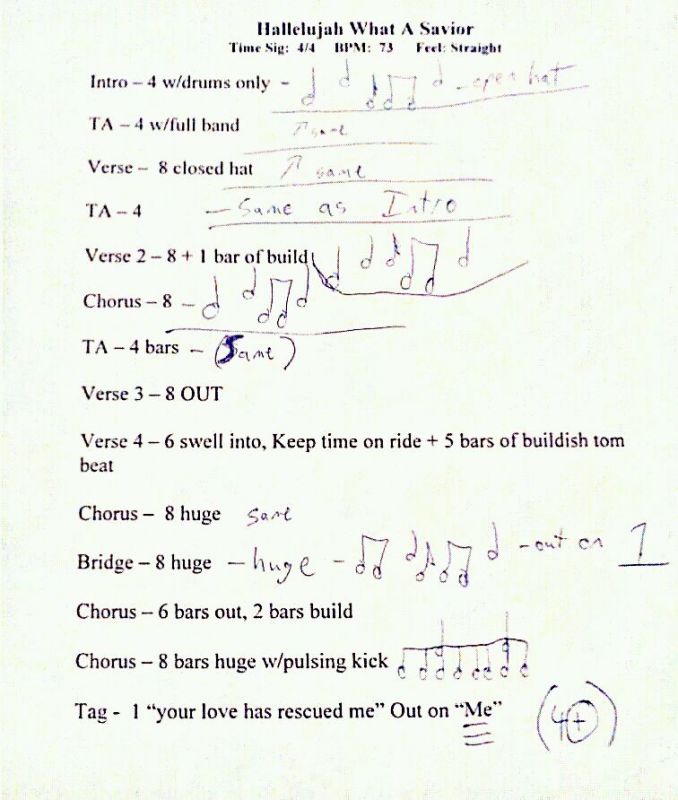 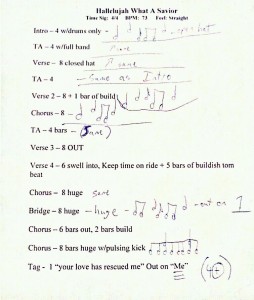 How to Make a Drum Chart

Most great ideas and inventions are birthed from people seeing a need that is not currently met in society and then creating a method or product that meets that previously unmet need. I started using drum charts when I found myself getting confused with song structure, and drum parts for the multiple bands that I played drums for at my church while I was in college. I was one of many volunteers’ drummers that rotated around the church playing in the Kidstuff band, the youth band, the celebrate recovery band, and the main service band. Up until that point I had played primarily with one main band or leader, who had always set aside at least 1 day a week to rehearse.  I was able to have lots of practice time with those bands, and in the rehearsal time we were able to work on song structure and each instrument crafted their own part for the song. By the end of our rehearsals, each band member would have the song ingrained in our head from the repetition of playing, critiquing, changing, and replaying each song until it was near perfect.

Why I started Using Drum Charts

When I was thrown into playing with 4 different bands at my church, I no longer had the luxury (I thought it was a luxury at the time) of rehearsing 1 song for an hour until it was perfect. I was expected to come to 1 rehearsal a week that was 1 hour BEFORE we played on Sunday (or Tuesday or Wednesday). At first I was frustrated because it was extremely difficult for me to actually learn the set list in an hour and attempt to play it well…but this was honestly one of the greatest things that could have ever happened to me. I quickly found out that if I wanted to keep up my A game with each band I had to be able to learn and play new songs within an hour of hearing the song for the first time. (This was before church’s used web based worship planning applications like Planning Center, which now makes it easy for worship leaders to upload mp3’s for their musicians to learn songs). I had been in school band since the 5th grade, so I had some experience writing and reading rhythmic patterns. I knew it wasn’t very efficient to actually write out every single bar of music that I would be playing for a given song, so I created my own method of charting out drum parts for songs.

Like I said earlier, this method is not for writing out every single beat down to the 32nd note. It is not a piece of sheet music. It is a road map for the song, and a tool that will help you play each song accurately every time, even if it is your first time playing the song.

When you have multiple gigs a week playing with different bands, you’ll need to be organized. I recommend buying a couple of manila folders. You’ll need one folder for each person you play with. On each folder, write the name of each band or worship leader you play with, and in each band folder, arrange the charts for the tunes in alphabetical order. You’ll put all of the artist’s manilla folders in a master folder to all of your gigs. At the gig, if you know the set list, you can arrange the charts for each set.

You should also create a “Master Click List” with the name of each some and tempo listed in alphabetical order. Put this next to your charts to reference just in case your band leader starts a song not in the set list.

To write a drum chart you’ll need to be somewhat familiar with how songs are structured. To help you identify song structures take a look at these common parts of a song:

To demonstrate writing a drum chart I’ve chosen a song off of the Austin Stone Live record that I played drums on.  This is just one method to writing drum charts, please take what you learned here and adapt it to whatever way suits you!

Steps in Writing the Chart

The finished chart should be able to get you through the song perfectly ever time you play it!

Check out www.austinstoneworship.com to find chord charts, video lessons, and more about the December 6th release of the first live record from The Austin Stone!